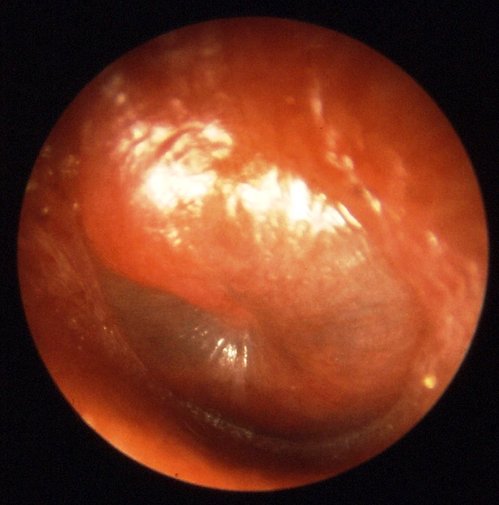 Patient with acute middle ear infection. Will not be accepted on a commercial flight.

The middle ear and the sinuses are semi-closed air-filled cavities that can cause a series of unpleasant symptoms when a person is exposed to variations in the surrounding air pressure and under circumstances where the individual’s opportunities to equalise air pressure are insufficient. The indi-vidual will experience a so-called barotrauma.

The air enclosed within the middle ear and the sinuses will expand during the aircraft’s ascent. At cruising altitude, where the cabin pressure is ¾ atm, this air will occupy 1.4 times its original volume. However, both the Eustachian tubes and the sinus openings will generally allow passive pressure equalisation. Thus, the ascent will most often not cause any discomfort.

During descent, the surrounding pressure will exhibit a corresponding rise. Under these conditions, pressure equalisation of the middle ear requires the active opening of the Eustachian tubes, as normally occurs by virtue of frequent involuntary swallowing movements. Pressure equalisation of the middle ear can be hampered if an oedema of the mucosa of the Eustachian tubes is present due to infection, allergy, or trauma. In addition to acute earache, in rare cases perforation of the tympanic membrane is observed (more frequently in diving).

Pressure equalisation of the sinuses requires that the mucous membranes of the openings of the sinuses are normal. The most important symptom of acute sinus barotrauma is pain, which can frequently be very severe.

Those persons who, because of a common cold, are at risk of developing middle ear or sinus barotraumas, together with those who, in general, are susceptible to developing barotrauma, should use a decongestant nasal spray such as oxymetazoline or xylometazoline during flight.

If the middle ear or sinus is completely filled with fluid, it will not react to changes in pressure; consequently, it cannot be subject to barotrauma while flying.

As mentioned above, in practice a middle ear barotrauma while flying will only occur during descent. If the pressure increase of the surrounding air is not accompanied by a more or less simultaneous pressure equalisation of the middle ear, this will lead to earache, transudation of fluid to the middle ear, and impairment of hearing. Performing the Valsalva manoeuvre (expiring with the mouth closed and simultaneous pinching of nostrils) or blowing an Otovent balloon with the nose during descent is helpful in preventing barootitis media.

If the barotrauma occurs in connection with an intermediate landing, there is no reason to interrupt the journey. On the contrary, during a renewed ascent, the person’s condition will return to normal, and he or she will have another opportunity – e.g. by use of a decongestant nasal spray – to equalise the pressure of the middle ear during the following descent.

Finally, it should be noted that intubated patients and patients with a nasogastric tube will all have tubal dysfunction.

This condition occurs in connection with common colds and is especially prevalent among children. In the early phases of the condition, when there is still air in the middle ear, pressure equalisation of the middle ear will not be possible during the aircraft’s descent.

Consequently, patients with acute otitis media with effusion should avoid flying if possible.

Should the condition persist (for more than 4-6 months), a grommet will usually be inserted into the child’s tympanic membrane and, under these circumstances, there is no hindrance to air travel.

Air travel is not contraindicated when the middle ear is completely filled with fluid.

If the patient does not have a grommet, an otologist should be consulted before air travel.

During the early stages of acute suppurative otitis media, there will be both air and pus within the middle ear. Later on there is often just pus, which is not influenced by changes in the pressure.

Most airlines will not allow a patient with acute suppurative otitis media to fly. Generally, they require the infection to be cured; moreover, the patient should again be able to ventilate the middle ear.

If the tympanic membrane has ruptured or has recently undergone myringotomy, the patient may fly.

Generally, patients with granulomatous otitis media have a central perforation of the tympanic membrane and a more or less continuous purulent discharge from the mucous membrane. This should not impede these patients from air travel.

This is not a clinically unambiguous condition. In most cases, it is the consequence of a prolonged tubal dysfunction. If the patient has a well-aerated middle ear through a tympanic membrane perforation, air travel is not in any way contraindicated. However, many patients will have, to a greater or lesser extent, sealed middle ear compartments or there may be sealing of the antrum and the mastoid cells. These patients can experience considerable discomfort during flying.

If the patient has a fistula on the semi-circular canals, there is a real risk for decompression of the inner ear with the result of permanent inner ear damage. Patients who are suspected of having choleasteatomas should be evaluated by a specialist prior to air travel.

Patients with dry central perforations of the tympanic membrane are allowed to fly. The same would apply to patients with very thin inelastic atrophic areas often seen in the tympanic membrane as a consequence of a prolonged tubal dysfunction. These areas easily burst with changes in pressure, an event that usually does not involve any particular discomfort for the patient.

In cases of chronic adhesive otitis media, the middle ear is often completely atelectatic and therefore insensitive to changes in the pressure of the surroundings.

After surgery to the middle ear, one should, in principle, delay air travel until the patient is able to inflate the middle ear with the Valsalva manoeuvre. This will normally be the case 10-21 days after surgery.

A cochlear implant (CI) is a surgically implanted hearing aid with an electrode located directly in the cochlea and a microphone placed behind the ear. An external receiver transmits the signal to the surgically implanted electrode by magnetic induction. All cochlear implants on the market have been tested with regard to flying and they are of no danger to the aeroplane’s instruments. During the flight, changes in air pressure do not cause any problems.

Flying with acute sinusitis carries with it a significant risk of sinus barotrauma. In pathophysiological terms, there is a smooth transition between a straight common cold and acute sinusitis. The borderline probably lies with those cases where the pressure equalisation of sinuses is impaired, and where, as a consequence of this, the build-up of low pressure within the sinuses along with the consequent transudation through the mucous membranes occurs spontaneously. If there is pain above the sinuses or pain is manifest when bending forward, one must suppose there is effusion within the sinuses. The principal rule must be that a patient showing clinical signs of acute sinusitis should not fly.

Recent nose bleeding should be well treated before departure. Patients with nasal packing should not fly, as the packing makes pressure equalisation of the sinuses and, possibly, the middle ear difficult or impossible. When using intranasal balloons, one should avoid inflating them with air, as the balloon will expand when the surrounding air pressure drops. The dry air within an aircraft further predisposes passengers to nose bleeds.

Every patient with a cold or symptomatic allergic rhinitis runs a great risk of sinus and middle ear barotrauma, and should, if possible, avoid air travel. If the journey cannot be delayed, a decongestant nasal spray or allergy medicine should be used.

In most cases of mandibular and maxillary fractures, reduction and fixation will be carried out, implying the binding together of the upper and lower jaw (intermaxillary fixation). The binding will be made after fitting arch bars on the teeth, and the arch bars are bound together either by wires or by rubber bands.

Irrespective of whether rigid or non-rigid fixation has been established, the patient will not be able to open his or her mouth.

If the fracture is not stable enough for the bindings to be removed during flight, the patient must be escorted by a nurse or physician carrying “wire-cutters” in order to be able to remove the bindings if necessary.

In many cases of nasal fractures, nasal packing is inserted which will make pressure equalisation of the sinuses and the middle ear difficult or impossible. Therefore, such patients should avoid air travel until the packing can be dispensed with. In the case of more complicated facial fractures, one should, before flying, ensure the airways are free by means of intubation or tracheostomy. The potential presence of intracranial air should also be excluded.

An exposed tooth root does not cause any discomfort in itself, but a bad dental filling, which, from time to time lets air pass, may cause distinct pain during take-off and landing.

A patient who has recently undergone a tracheostomy must be escorted by an anaesthetist or an anaesthetic nurse, who is able to change the patient’s cannula, suction the trachea, and ventilate the patient through the tube/cannula if necessary. The patient should, if possible, be fitted with a double cannula, so that, on removal of the inner cannula, one can instantaneously achieve the free passage of air if the cannula should be blocked. The extremely dry air in the aircraft predisposes to the formation of scabs. Suction and ventilation equipment should be brought. It is advisable to bring a saltwater spray or simply a hypodermic syringe and a cannula with which one can squirt salt water through the cannula/tube down into the trachea. Proper air humidification equipment can be difficult to operate on board an aircraft, but, naturally, it is desirable.

A chronic tracheostomy patient requires no special precautions when flying.

During a flight, most people do not feel any discomfort besides maybe motion sickness. People suffering from Eustachian tube dysfunction might experience so-called alternobaric vertigo, which is a strong rotator vertigo caused by a difference in pressure in the right and left middle ears. The pressure in the middle ear is thought to be propagated to the inner ear, causing the condition. Certain diseases cause some people to suffer from a pronounced dizziness as a result of sensitivity to pressure. Depending on the patient’s current condition, thorough instructions must be given prior to the flight. Additionally, these patients should perform the Valsalva manoeuvre frequently but gently and, as a supplement, use a decongestant nasal spray.