14. and Problems in Pregnancy 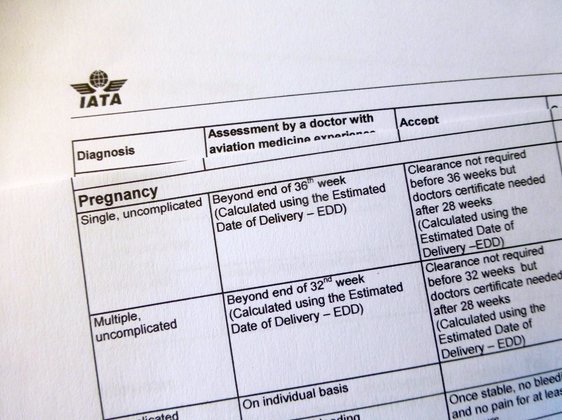 Where bleeding is minor to moderate, treatment can usually be delayed until the patient arrives home. If possible, a gynaecological diagnosis should be performed before travelling.

Where bleeding is major, the patient should be seen by a gynaecologist and either put on medical treatment or have a dilatation and curettage performed locally before travelling. After starting medical treatment, one will have to wait for the bleeding to decrease and the date of travel should be evaluated individually. After an abrasion, the patient can usually fly seated and unescorted after 24 hours.

Wherever possible, patients with PID should have undergone full treatment with rest and antibiotic therapy before travelling. It is important that an ultrasound examination is performed to state the diagnosis and make sure that there are no complications that could cause flight-related problems.

If it is an uncomplicated PID, the patient should be without fever and pain for 2 days before she may travel, seated and without an escort.

An ovarian cyst only causes problems if it ruptures or twists. This will generally produce acute abdominal symptoms requiring acute laparoscopy, perhaps followed by laparotomy. In the case of a fortuitous asymptomatic finding, the patient will be able to travel as planned.

Flying by commercial flight will not normally affect either mother or foetus. The closer one comes to term (40th week), the greater the risk of the onset of labour. In-flight births are not welcomed by airlines and they have therefore set the 36th week as the deadline for transporting a woman with an uncomplicated pregnancy by air. However, on short flights, some airlines allow pregnant women beyond the end of the 37th week but consent must be obtained from the airline beforehand. After the 28th week, several airlines demand pregnant women to carry their pregnancy journal or another document stating the estimated date of delivery and confirming that the pregnancy is uncomplicated.

Pregnant women in the 2nd and 3rd trimester, as well as women in the first few weeks after delivery, have an increased risk of developing DVT. During flights lasting more than 4 hours, they should be wearing compression stockings, besides following the general recommendations. If the woman has other risk factors, treatment with low weight molecular heparin is advised (please see Thromboembolic prophylaxis, chapter 1).

Pregnant women should be informed of the risk they run during the last 1-2 months before birth, when possible pregnancy complications during an overseas visit can prevent her from returning home for the delivery.

• Uncomplicated single pregnancy until and including 36th week: Normal flying

• Uncomplicated twin pregnancy until and including 32nd week: Normal flying

In both situations, it is important that an ultrasound examination has been performed ensuring that the uterus is empty.

If the results of the ultrasound examination are normal and 3 days pass without bleeding and any pain, the patient may travel by air, seated and unescorted.

If the results of the ultrasound examinations are normal and the patient has 1-2 weeks without bleeding, no pain, and is mobilised without having symptoms, she may travel by air, seated and unescorted.

In those cases where there is a risk of the onset of labour, the patient should not be transported if local treatment facilities are of an adequate standard. The pregnant woman should stay and deliver her baby locally. If local treatment facilities are very inadequate and if the pregnant woman is at risk of going into preterm labour, repatriation by air ambulance may have to be considered.

After 24 weeks gestation, it is reckoned that the child is able to survive, and therefore, an incubator should be carried, together with the instruments and equipment necessary for a delivery. There must be an obstetrician, a neonatologist, and a neonatal nurse escorting the pregnant woman.

In cases where there has been preterm rupture of the membranes and the patient is otherwise stable (i.e. no contractions, no pain, no bleeding, and no change of cervix), she may be repatriated by commercial flight after one week, lying down and escorted by an obstetrician. The obstetrician is prescribed as an escort primarily to make a local assessment before transportation. He or she must make sure that the information given about the patient’s condition is true, thereby minimising the risk of the patient going into labour during the transport.

Where preeclampsia is mild, and where the condition stabilises again, a patient may be transported by commercial airline within 1-2 weeks, seated / recumbent and accompanied by a physician.

In principle, where pre-eclampsia is more severe, the patient may not be transported and must remain at the place of treatment until delivery.

Where condition is asymptomatic, no special precautions need be taken. However, the patient should be advised not to travel too late in pregnancy.

Where there have been symptoms but the patient’s condition has stabilised and there has been no bleeding for 1-2 weeks, the patient may be transported lying down and accompanied by a physician (if appropriate, with a reserve of blood / IV fluid). The circumstances will dictate whether transportation shall be carried out by commercial flight or by air ambulance.

After an uncomplicated delivery, the mother may fly within 24 hours and the child within 7 days (IATA).