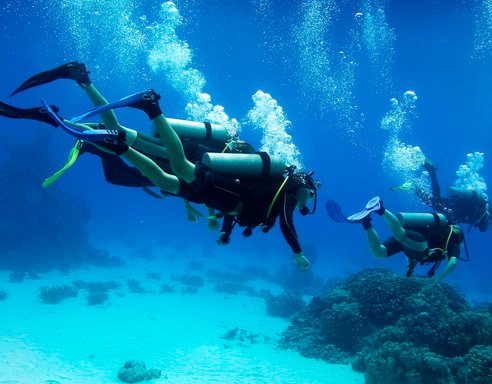 After SCUBA-diving, it is recommended that there is a 24-hour interval between diving and flying. If it is only a superficial dive, flying is acceptable after 12 hours.

Acute Mountain Sickness (AMS) is a constellation of symptoms and signs that occurs in previously healthy individuals when ascending to higher altitudes where the partial pressure of oxygen is reduced. Approximately 20% experience light symptoms like headaches, nausea, and dizziness already at 2.500m, while more severe symptoms can occur when ascending to higher altitudes (3.000-4.000m).

Severe cases include High Altitude Cerebral Edema (HACE) presenting with massive headaches, nausea, vomiting, altered sensorium, and seizures. Another serious kind of AMS is the High Altitude Pulmonary Edema (HAPE), which presents with pulmonary stasis, chest pain, and palpitations. Both of these conditions are associated with a high mortality.

People have different susceptibilities to altitude sickness. In general, AMS can be prevented by a slow ascent, adequate altitude acclimatisation before making the next ascent, and drinking plenty of fluids, approximately 3-4 litres a day. In addition, acetazolamide (Diamox®) can prevent AMS to some extent when taken in doses of 250 mg per day, beginning two days before the ascent to two days after arriving at the maximum altitude.

The treatment of severe AMS includes transporting the patient to a lower altitude and administering oxygen, which can be done most effectively in a hyperbaric chamber. The medical treatment also includes calcium channel blockers and corticosteroids.

Flying after AMS is rarely a problem, as the cabin pressure usually exceeds the pressure causing the patient’s AMS. In severe cases of AMS such as HACE and HAPE, the patient should be without symptoms before he can be transported by commercial flight.

Decompression sickness (DCS) is also known as diver’s disease or caisson disease. The symptoms are caused by the formation of nitrogen bubbles in the blood and tissue during decompression, typically when the diver surfaces after a dive.

The most frequent symptoms seen in DCS are joint pain and paraesthesia, but also dizziness, extreme fatigue, and balance and coordination disturbances are observed. In rare cases, respiratory difficulties, shock, loss of consciousness, and even death occur.

To prevent DCS, dive tables are used. These tables take into consideration the amount of nitrogen absorbed in the body at different depths for different times. Even though the dive has been performed in compliance with the dive table, there is no guaranty that the diver will not get symptoms of DCS, as individual risk factors influence the risk. Risk factors include deep dives, repetitive diving (more dives on the same day), and diving on subsequent days. Furthermore, the risk increases if the diver is dehydrated, cold, or has been working hard during the dive.

Flying after diving is associated with an increased risk of developing DCS due to the reduced pressure in the cabin. Therefore, it is recommended that the diver have a surface interval of at least 12 hours after a single dive and 24 hours after repetitive diving or deep diving before flying. After hyperbaric oxygen treatment with the complete disappearance of symptoms, a surface interval of at least 72 hours is recommended before flying by commercial flight. If the patient has residual symptoms, he should be assessed by a diving physician to determine when it will be safe for him or her to fly home. This can take up to three weeks.