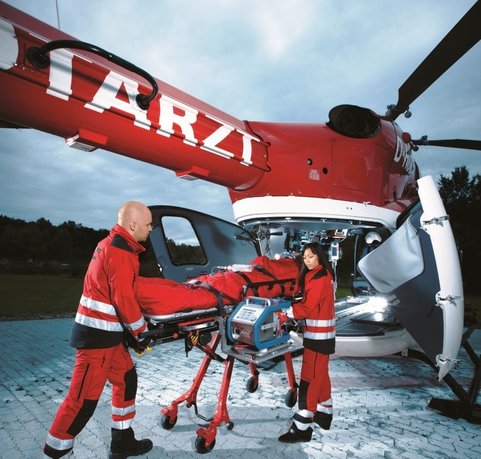 There has been an increase in the number of specialised patient transportations being undertaken in the last decade, not only locally but also internationally. It is related to:

• Patients with infectious airborne illnesses: Special setup for the transportation of patients in

The abovementioned transports, which are normally undertaken by air ambulance, require specialised equipment and appropriate specialist medical teams to execute. Not all air ambulance organisations can undertake these types of transportation.

ECMO (Extracorporeal Membrane Oxygenation) is the joint designation for a variety of treatments that involve assisting and supporting seriously ill patients with either lung or cardiac failure. The technique is based on the Cardiopulmonary bypass (CPB) technique and pump (heart-lung machine), which is used in cardiac surgery. Since the turn of the millennium, improvements in technology have produced small mobile units for use during flight on patients who would otherwise not have been able to tolerate air transport. ECMO is always used on patients suffering acutely occurring disorders, who have the possibility of recovery. Such acute disorders occasionally occur during international travel, and the only possibility for successful repatriation is if ECMO has been started on-site. Repatriation with the patient in ECMO is always done by air ambulance with a specialist team and the patient fully sedated.

Most cases of acute lung failure during transportation are the result of infection; however, acute lung failure is also seen especially with military personnel exposed to blast injuries in relation to bomb explosions. In these cases, veno-venous ECMO is mainly utilised, where blood is taken from vena cava a good distance from the heart, pumped through an oxygenator, and returned to vena cava close to the heart. In this way, the blood will be almost completely oxygenated before it passes the poorly functioning lungs. Either two separate cannulae or a double lumen catheter can be used as venous access. In the latter situation, blood is drawn from the one lumen and returned close to the right atrium through the other. Catheters, blood pumps, and oxygenators are disposable equipment, while an external device controls the pump with the help of a magnetic field. The equipment weighs 5-15 kg, depending on the brand.

In principle, most forms of heart failure can be treated temporarily with veno-arterial ECMO. Temporary ECMO can be used on patients who suffer from cardiomyopathy, pump failure after acute myocardial infarction (AMI) or acute heart valve insufficiency. Aortic valve insufficiency is a little more complicated to treat with ECMO, as it can become necessary to supplement with drainage directly from the left ventricle or assist with an internal pump (Impella) , which can be placed across  the aortic valve pumping blood from the left ventricle to the ascending aorta. The device is inserted via the femoral artery.

An ECMO team normally consists of a surgeon, an anaesthetist, and a perfusionist. Some teams consist of just two specialists: a perfusionist and either a surgeon or an anaesthetist. The ECMO team should have a very short response time for rapid deployment to the patient, usually by helicopter. They connect the patient to the ECMO device and then usually accompany the patient to an ECMO centre for further treatment. In some cases, for example, cases of hypothermia, the patient undergoes the full treatment on-site. Regarding transport: if the distances are short with adequate roads, an ambulance can be used; with longer distances, a helicopter or aeroplane should be used.