26. First Aid on Board – Legal Considerations

Many doctors are unsure as to whether they may be held legally responsible for any incorrect treat-ment they may give while rendering first aid on board an airliner. Such uncertainty may be greater in the case of travel within the USA, where it is more common to bring lawsuits against doctors in order to obtain compensation for damages. However, to our knowledge, no individual doctor has to date been sued for assisting an ill traveler, although a few airlines have been sued as a result of an in-flight medical event. 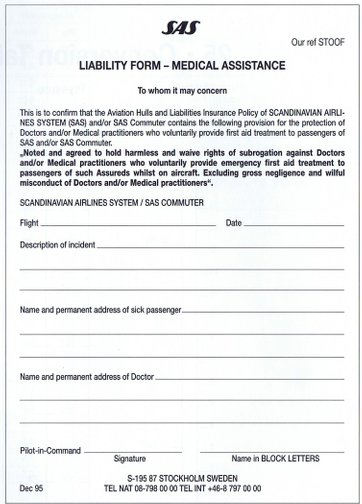 In many countries, it is possible for a patient or a close relative to sue for damages a doctor who has rendered assistance in an emergency. However, the laws dealing with this subject vary so much that it is difficult to give general guidelines.  For example, French doctors are obliged under French national law to render assistance and can be found liable if they do not.  This applies to events on board an aircraft, wherever it may be at the time.  In other countries, assisting an unwell passenger is considered a Good Samaritan act i.e. there is no legal obligation to assist.

In the USA doctors have no obligation to volunteer under the law.  However, the federal legislation contained in the Aviation Medical Assistance Act of 1998 states: “an individual shall not be liable for damages in any action brought in a federal or state court arising out of the acts or omissions of the individual in providing or attempting to provide assistance in the case of an in-flight medical emergency unless the individual, while rendering such assistance, is guilty of gross negligence or willful misconduct.”

In those countries where Islamic law applies, a person who causes another’s death can be required to pay compensation to close family members for loss of a family provider. Such compensation, known as “blood money” is not known to have been paid in the event of a doctor providing medical care on board an aircraft.

Note that if a doctor provides care to a fellow passenger at his own initiative (rather than waiting for the crew to ask for such assistance), the doctor is likely to be personally liable for his own actions.  On the other hand, if a doctor responds to a request from the crew, the airline company is normally considered responsible for any harm to passengers.  Many airlines offer a “Liability Form - Medical Assistance” or a similarly named document to a doctor who has offered first aid assistance on board. This confirms that the company takes upon itself the legal responsibility for the doctor’s treatment of a passenger. However, willful misconduct or gross negligence cannot be expected to be covered.

Another question related to medical incidents on board concerns ”Do Not Resuscitate” (DNR) instructions.  However, there is no international law or case law that covers this issue. If it comes to the attention of a cabin crew member that a passenger is not well and the attending family member presents a DNR order, most airlines will refuse to recognize this and may request medical assistance to provide resuscitation. The medical professional that comes forward has to decide if he wishes to proceed with resuscitation according to his ethical values and legal knowledge about the situation (which is likely to be limited). If death has occurred, the volunteer doctor should follow the re-commendation of the Aerospace Medical Association publication ”Managing In-Flight Medical Events” which states that ”since the legal implications for declaring the death of a passenger vary from country to country, airlines have different policies. If a death has occurred, the assisting medical professional should limit his involvement to advising the cabin crew as to the event, deferring to the pilot in command the communication that will be made to ground based authorities and any further action needed to be taken on board.”

In summary, the risk of being pursued in the courts for rendering treatment on board aircraft is very small.  However, doctors and other health professionals who volunteer may wish to ensure they are aware of the possible civil, criminal and medical licensing repercussions in their own State that may occur should they volunteer (or if they choose not to volunteer) and the outcome is not as desired.   Medical Defence Societies can provide useful guidance in such matters, including the implications should a case be brought outside the State of medical license issue.

In general, during an event on board volunteer doctors should limit them to providing medical assistance, within their area of competence, and leave the logistics and communication details to the cabin and flight crew.